This month, I set myself a challenge, it was to create all of April's meals out of what I had already in my house (bacon, cheese, beans, rice, pulses, tinned tomatoes, stock, herbs, spices etc.), and three local veg box deliveries.

I chose to do this for several reasons:

I chose to try Kent Veg Boxes over all the bigger, often recommended companies. All their veg is sourced within 35 miles and is harvested no more than 2 days before delivery- that's a tiny mileage compared to supermarket food and makes it bloody fresh. They're not organic, but neither do they use masses of harsh chemicals and I've seen the little creepy crawlies that prove it! They also offer local eggs, milk, bread, fish, game, meat, cheese and beer. The veg and eggs are pretty bloody economical too, they even do price comparisons to show how they work out cheaper than Tesco, I've not checked them personally, but having shopped in Tesco, I believe it it to be true. However, some fruit due to Britain's climate is obviously shipped in- oh, if only we could grow bananas- I don't really eat much fruit though, so I care less about this. Selfish, I know.

I ordered a small veg box, as it's only myself and my Mr that I ever really cook for, and by golly is it plenty to last the week. It's not been massively varied, but that's a) due to the fact I've specified that I don't want carrots or beetroot, and b) because it's seasonal, so you get what's ready to eat here and now, not what's been grown somewhere else and flown in. It is also more than enough to make a selection of various meals and accompaniments without getting bored. The veg itself is not so unbelievably delicious that the yumminess obliterates the validity of Supermarket veg, but it's at least as good, if not better, and the ethics, convenient doorstep delivery and Christmas Present like excitement of going through the box each week does.

So it got me thinking, what if next month, apart from store cupboard essentials, I try to eat entirely locally? Challenge accepted. This I did choose to do for many reasons:
So next week I will continue with my weekly small veg box and egg delivery. I will also be ordering a fish box and a game box. In theory, that should mean that unless I'm out and it's unavoidable, my monthly food spend will only be around £107, which is pretty good for someone who enjoys weekly £50 shops. It should also mean that I will continue to maintain my figure, encourage me to be more adaptive in the kitchen and I'll also eat less meat- take that evil slaughterhouse industry!

Some problems I expect to come across are; running out of food, having to buy an ingredient to stop a recipe being a failure and eating out. We were away a bit this month and have been catered for by generous others, so may be down to rice and frozen peas by the end of each week. I also don't want to hate everything I eat and generally be an angry hunger bum just because I told myself I can't have avocado, sour cream or bacon. As well as this, I spent a ridiculous amount of time this morning unclogging all that lovely, good veg box dirt from my fridge, so I have now decided to do something I saw Jamie Oliver do once (I think). I am now washing most of my greens first and storing them in clean tea towels in my veg drawer. This may or may not compromise the longevity of it's life. I shall let you know... 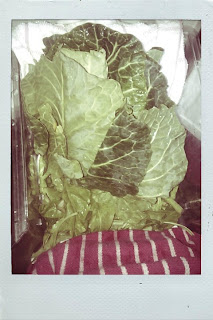