Pheasant To Eat You.

I'm so excited about the look of tonight's dinner, that I'm writing this post before it's even finished cooking. I know, presumptuous, right? But it's just so colourful right now, and given that I stole some inspiration from this dinner- which is apparently my official taster's most favourite thing ever- my hopes are high. I really hope this turns out well, otherwise I may cry. And crying is just un-pheasant.

Before I finish cooking it, taste it, take more pictures and give you the recipe, I would like to thank anyone that has ever brought wine to my house and left some behind, even if it's only half a bottle. I don't drink wine, as unfortunately drinking it makes me violently ill, very quickly which just isn't fun for anyone. But often after hosting social occasions I find half or full bottles of unimbibed grape nectar. Now if this were tequila, I'd be thinking "What a waste! That won't be drunk. Why can't people finish their drinks? Don't they know this form of alcohol makes me unwell and will now sit here, taking up room in my bar until it evaporates or solidifies?! How thoughtless." But if it's wine, I think "YES! I can make some kind of amazing dinner without having to buy a bottle of good enough to drink wine. I don't know what good enough to drink wine is because it's all poison to me, however, someone bought this specifically to drink, which means it must be drinkable to a wine drinker even though they didn't finish it. Thanks lightweight who failed to consume all of their booze. A future dinner of mine will be amazing due to your lack of ability to consume alcohol like a grown up." In short, there's wine in this recipe and I don't know where it came from, but I found it in my fridge so it's mine now and I'm cooking pheasant in it. Thanks anonymous donor.

You will be pleased to know that dinner was both consumed and enjoyed. I'm kicking myself for not brining the old bird first, as she wasn't quite as succulent as I'd have liked, not dry, just not quite juicy enough. But she was tasty, and tasty with flavours I rarely put together. The orange really lifts this dish and does something wonderful to the green pepper, which is great as green is everyone's least favourite of the bells. It's got quite a mediterranean feel to it; Brit bird abroad maybe? There was also a lot of it and even my monster muncher couldn't polish off as much as usual, so it's quite an economical dish. If I were to make any changes, I'd brine the previously frozen bird first and add a little more wine or water to the pot. Give it a go, it's one pot and a fruity little number and I think you'll love her. Pheasant to Eat You
Serves 4 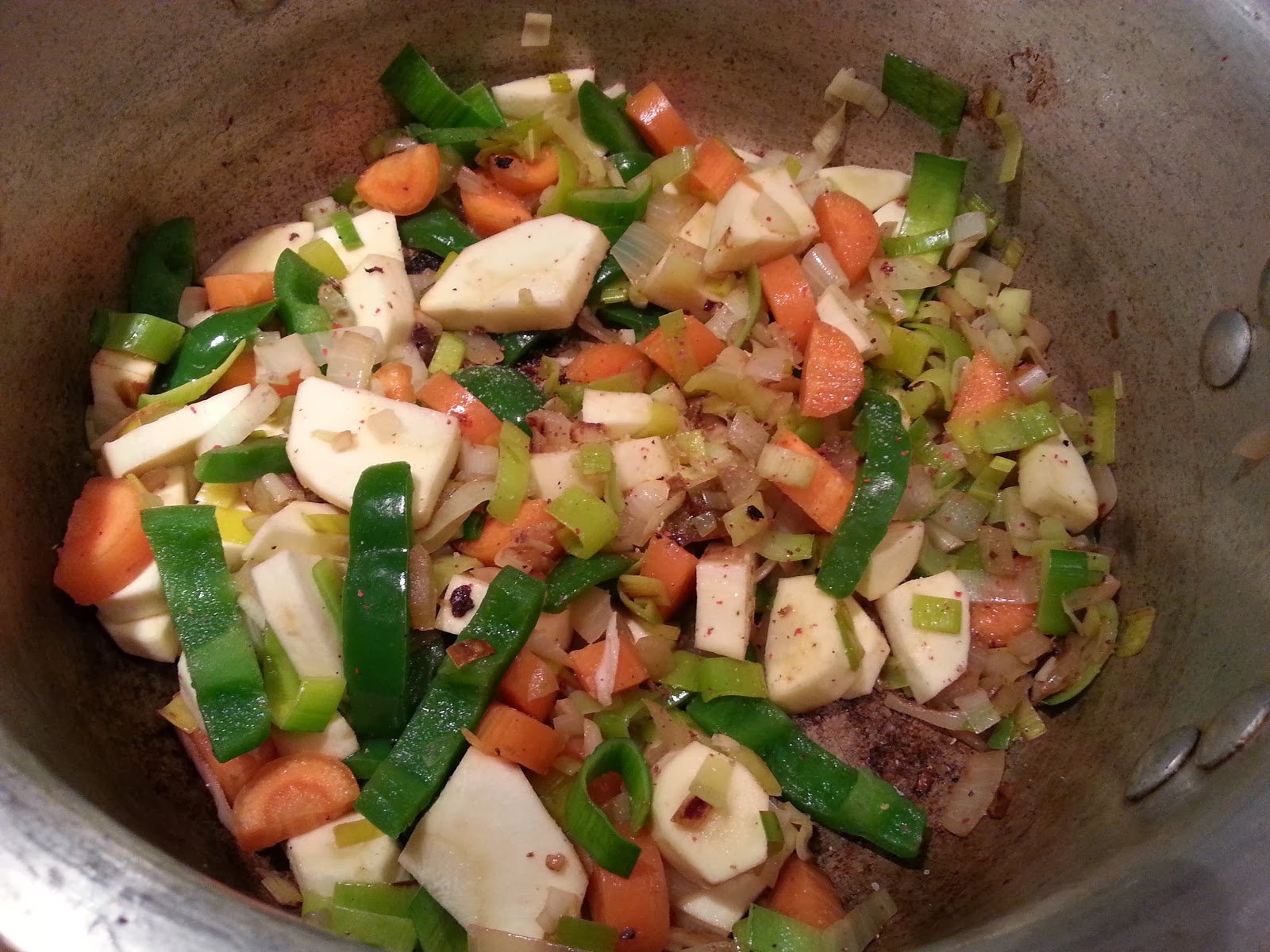 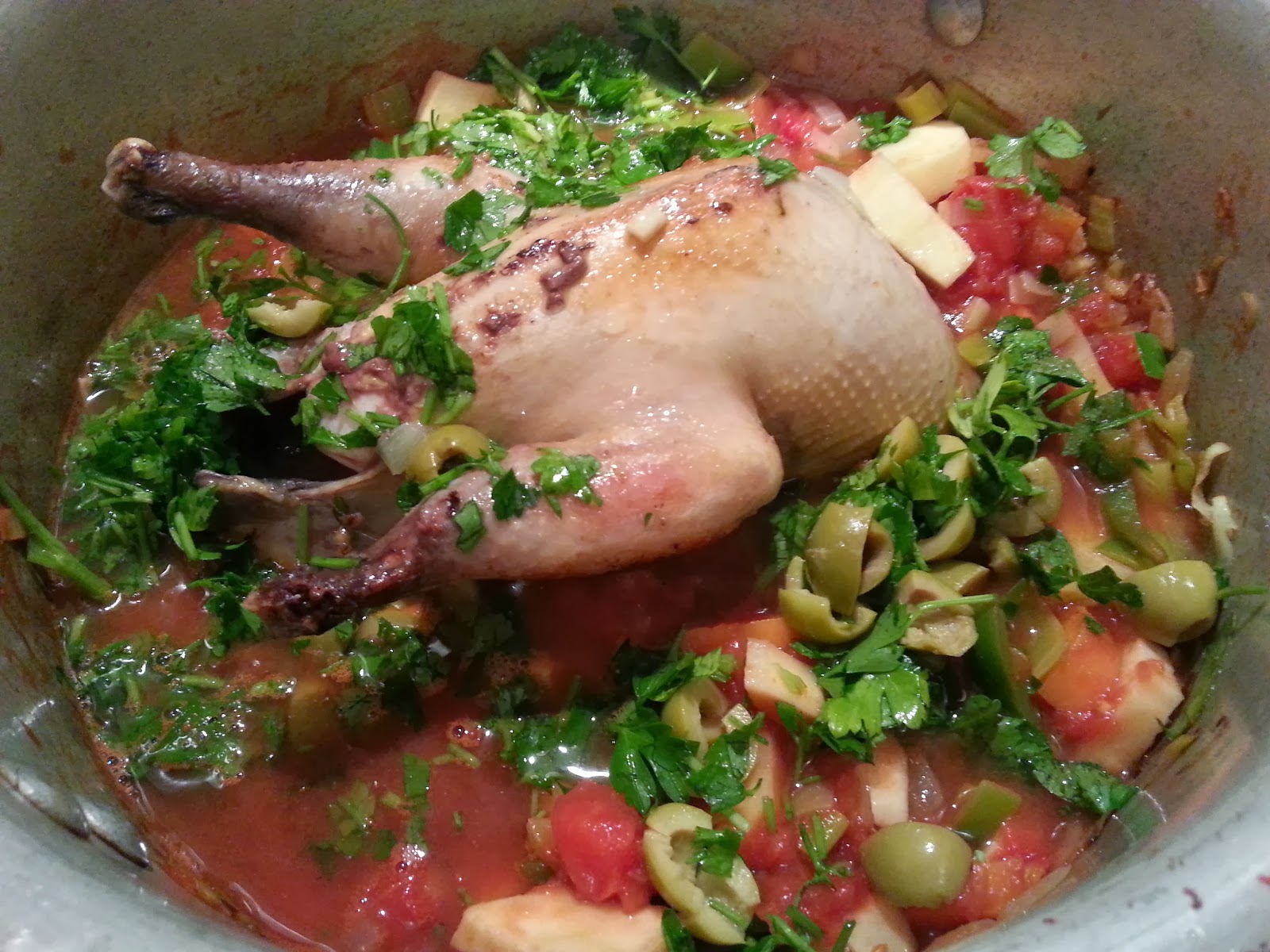 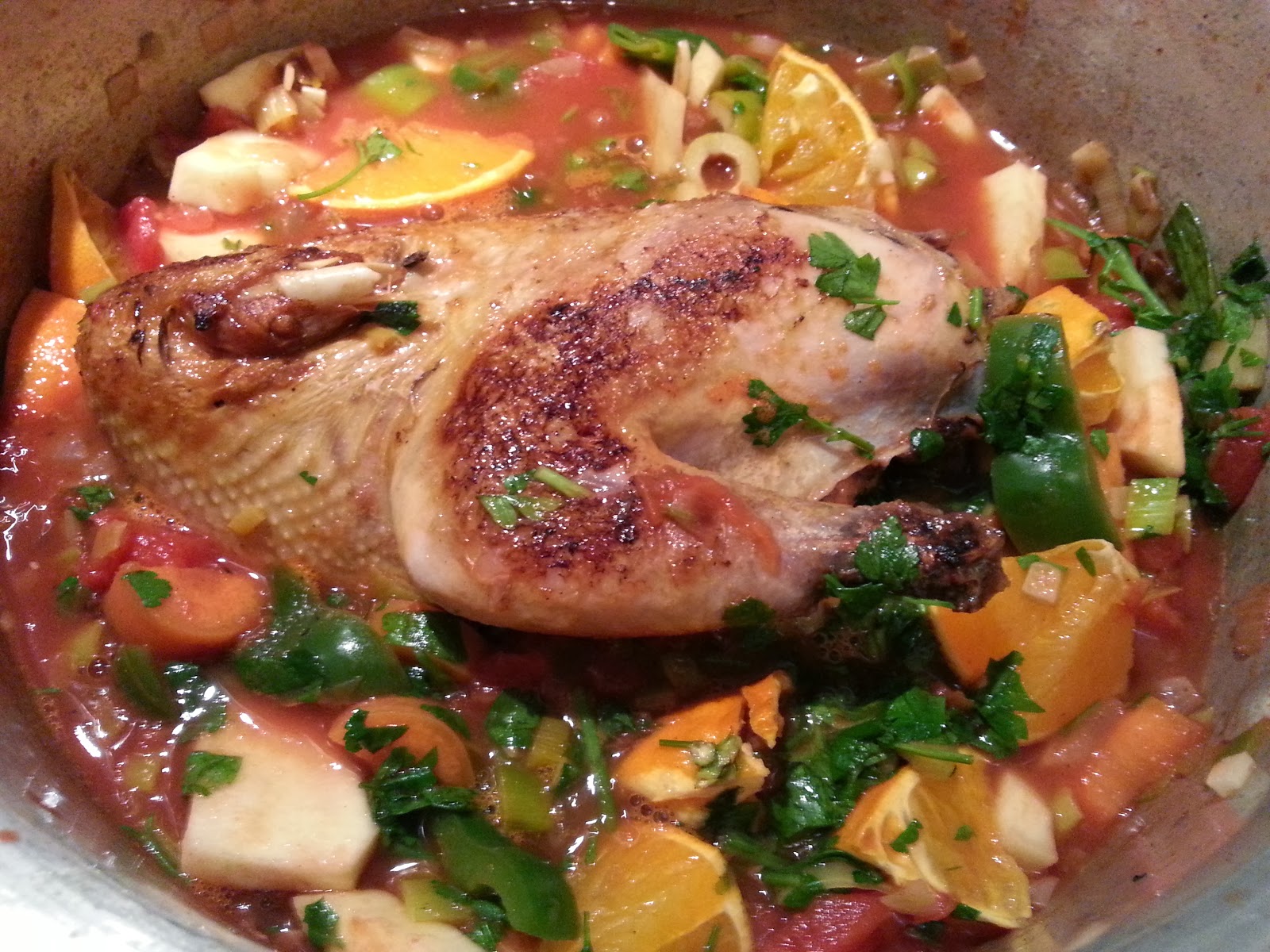 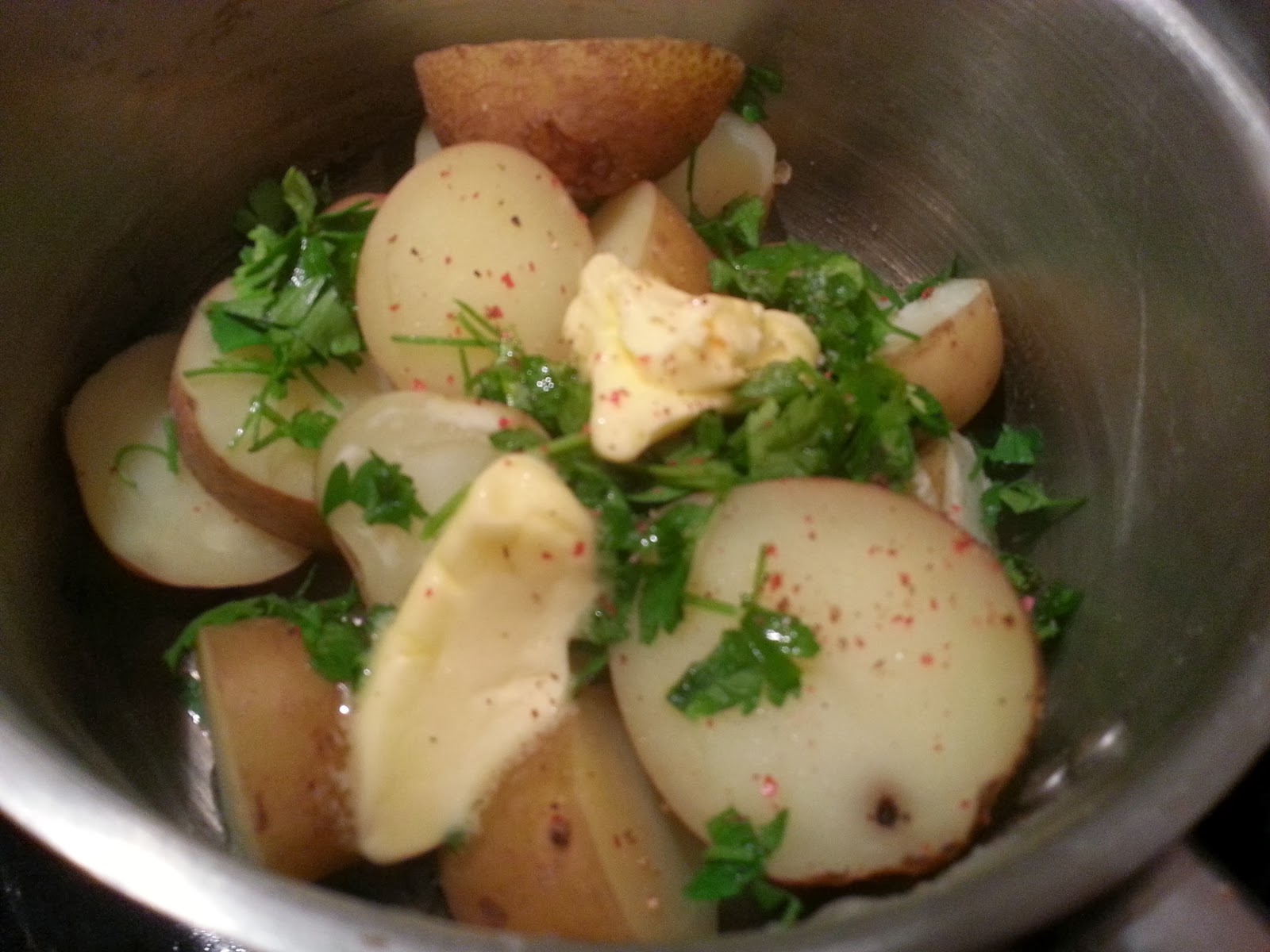 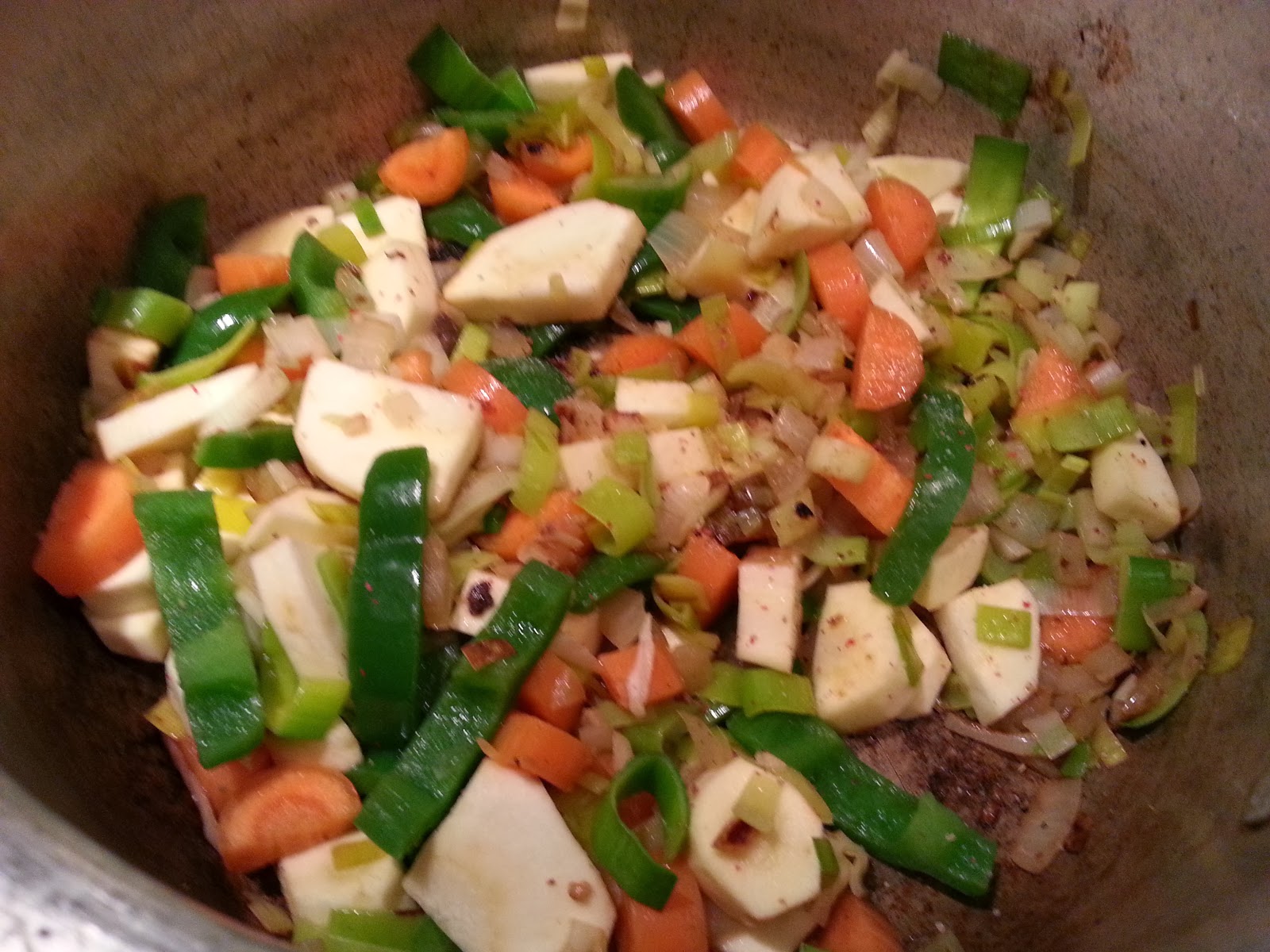 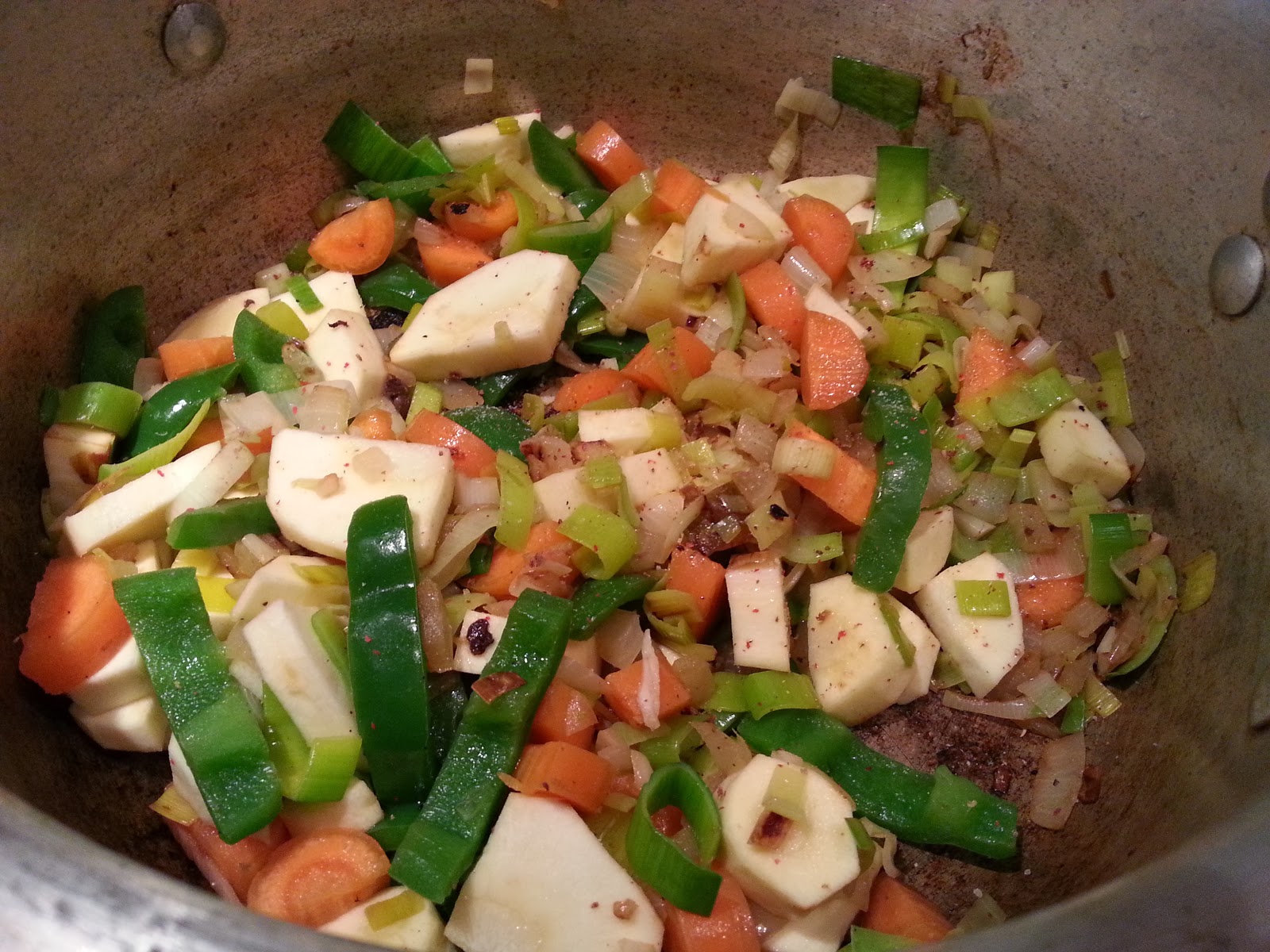 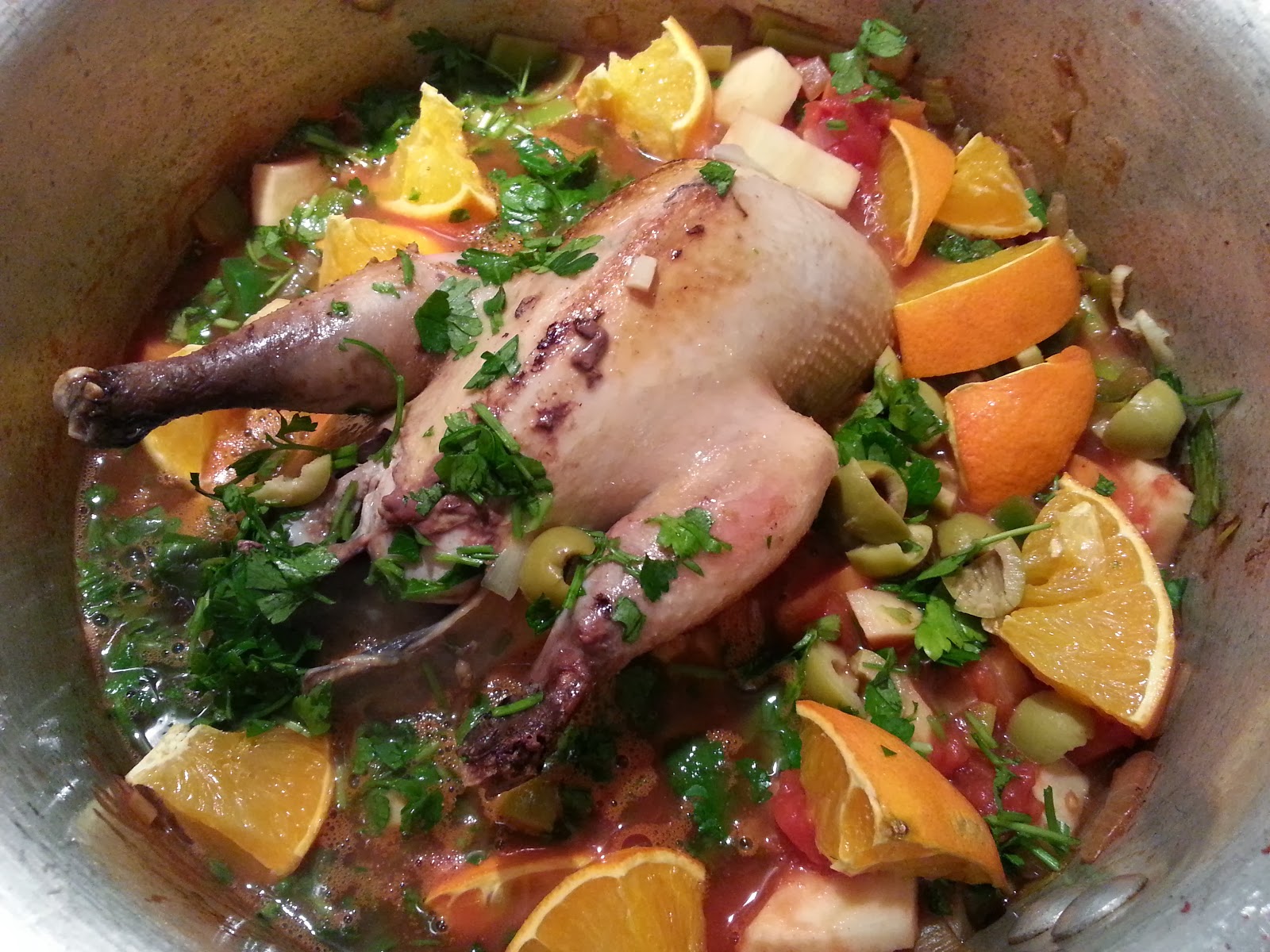 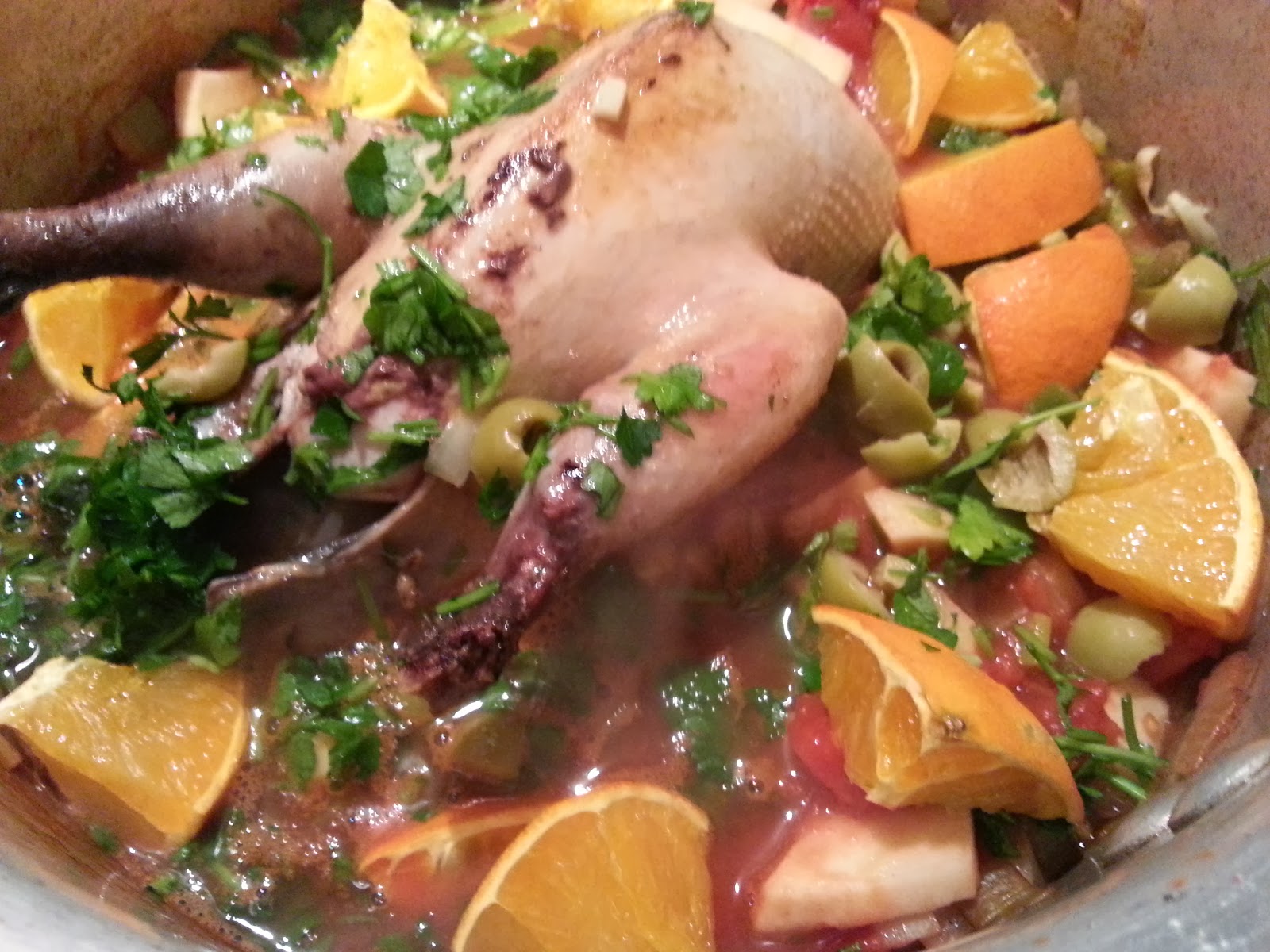 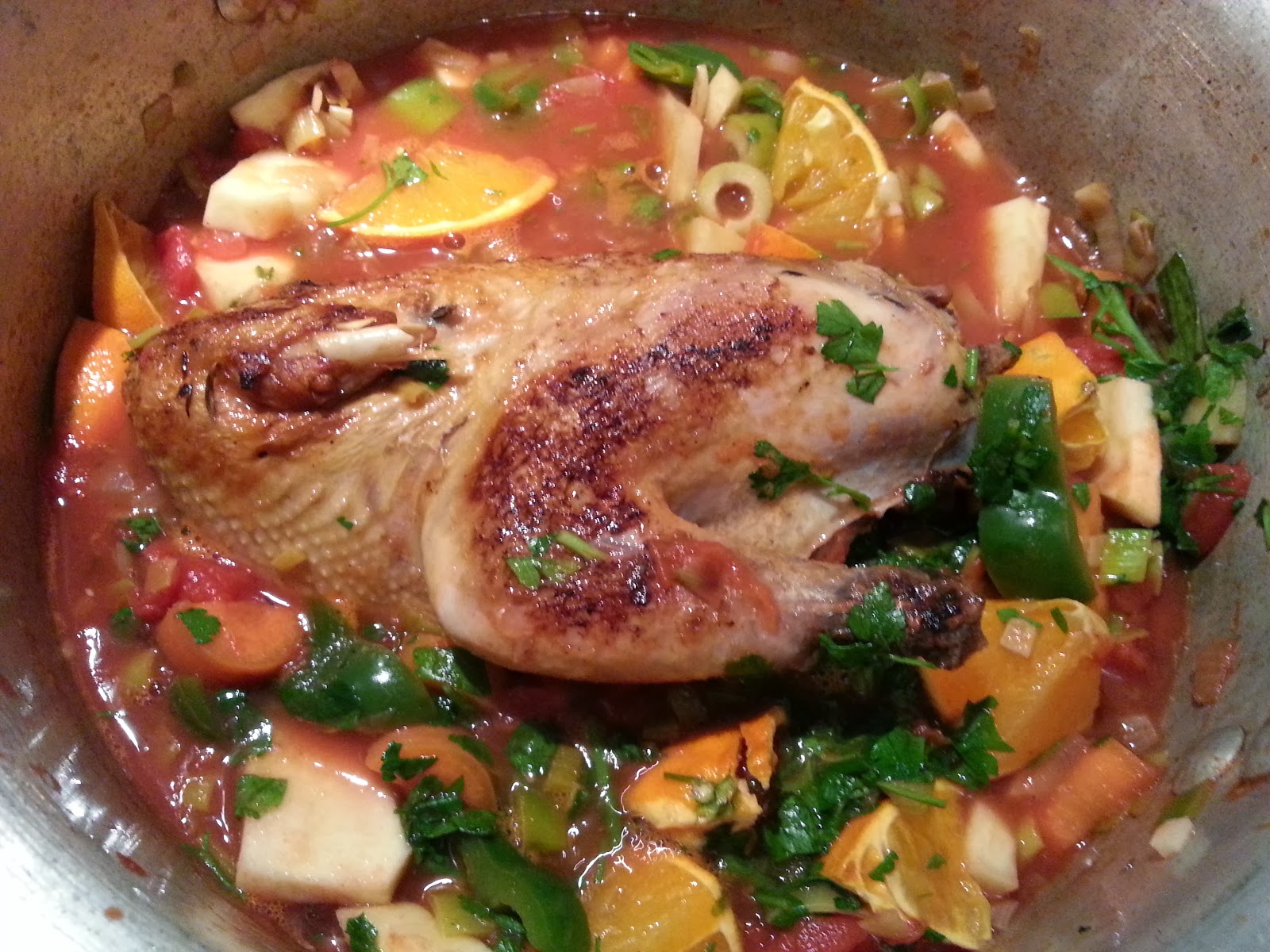 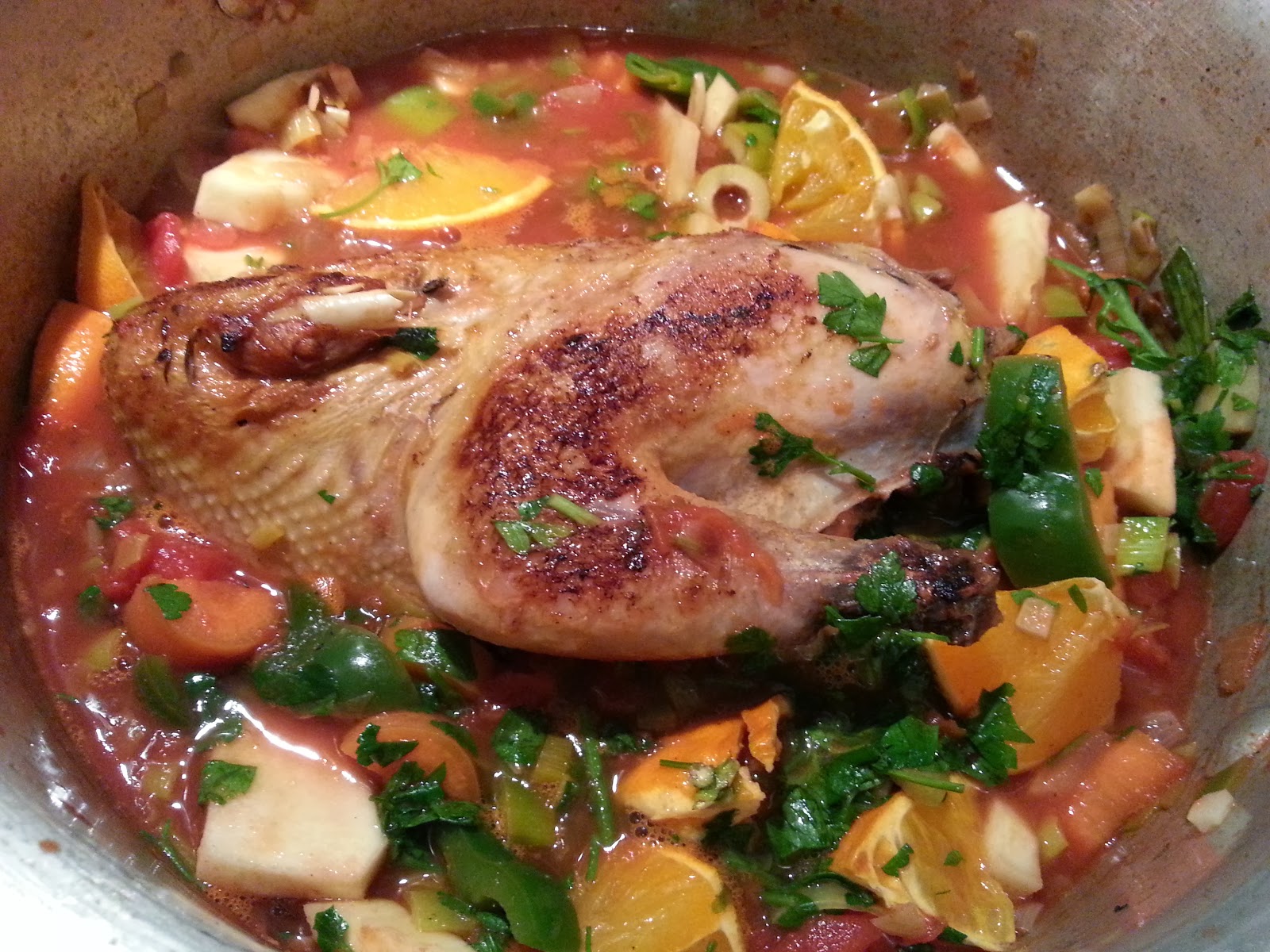 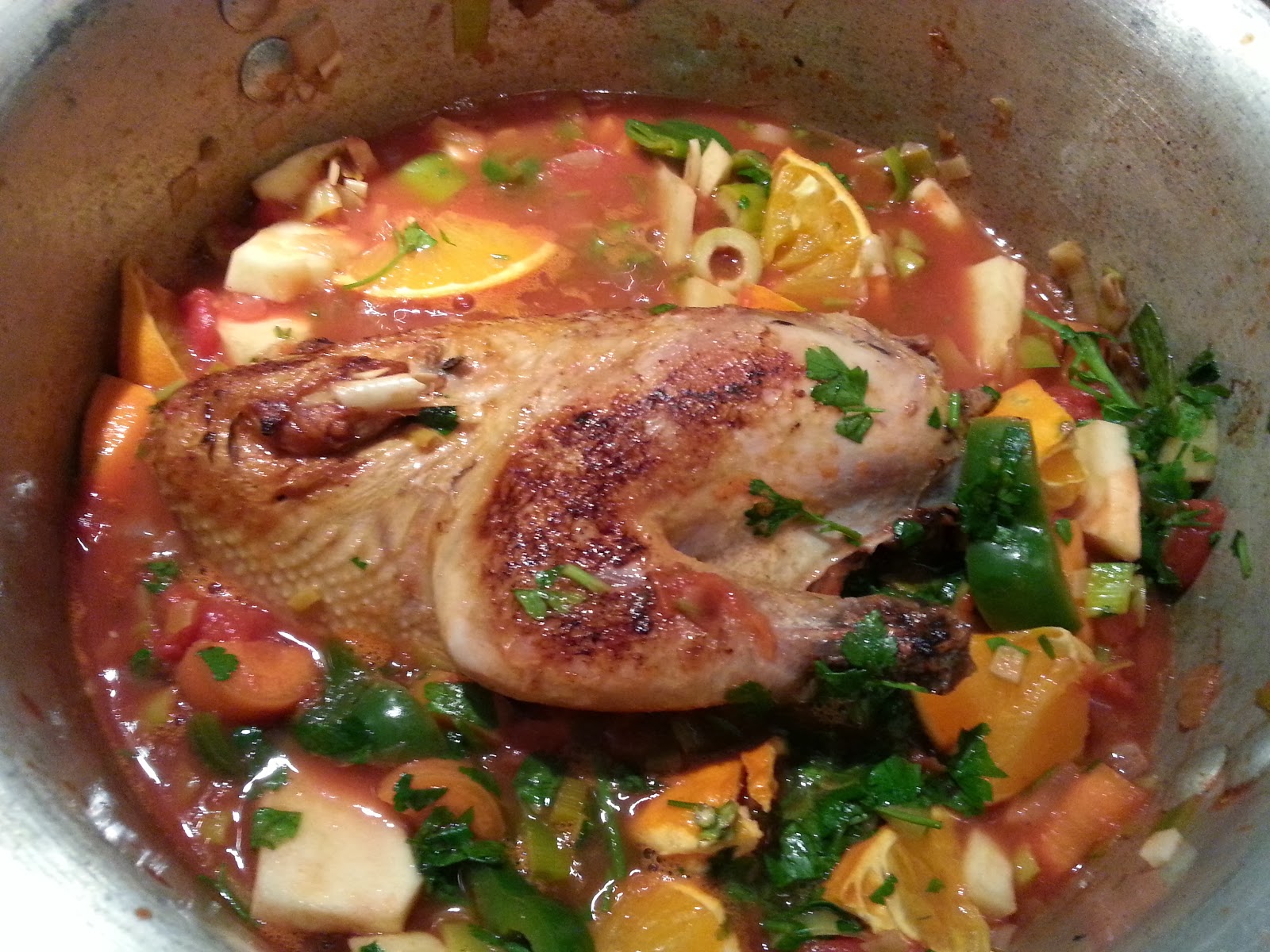 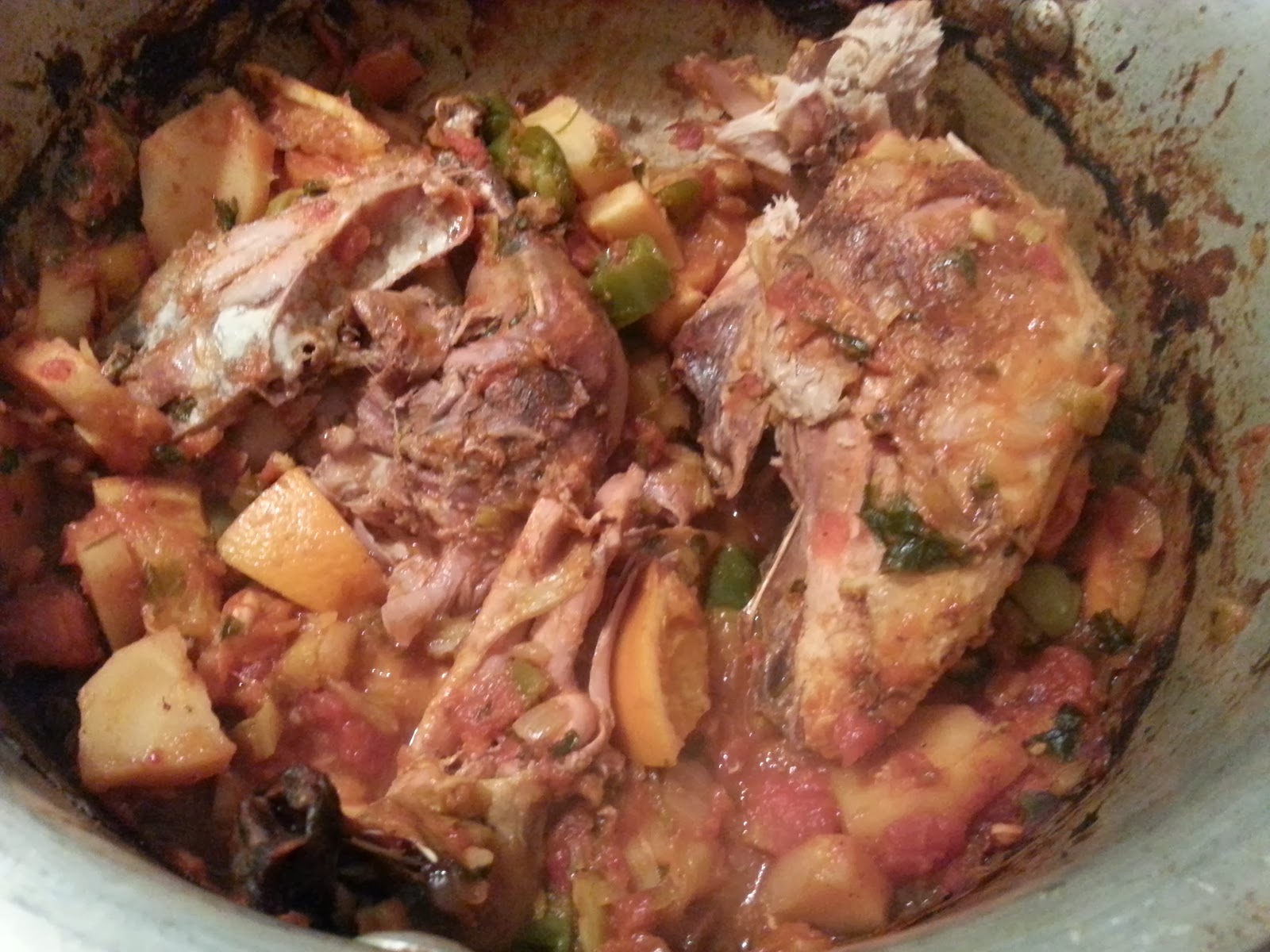 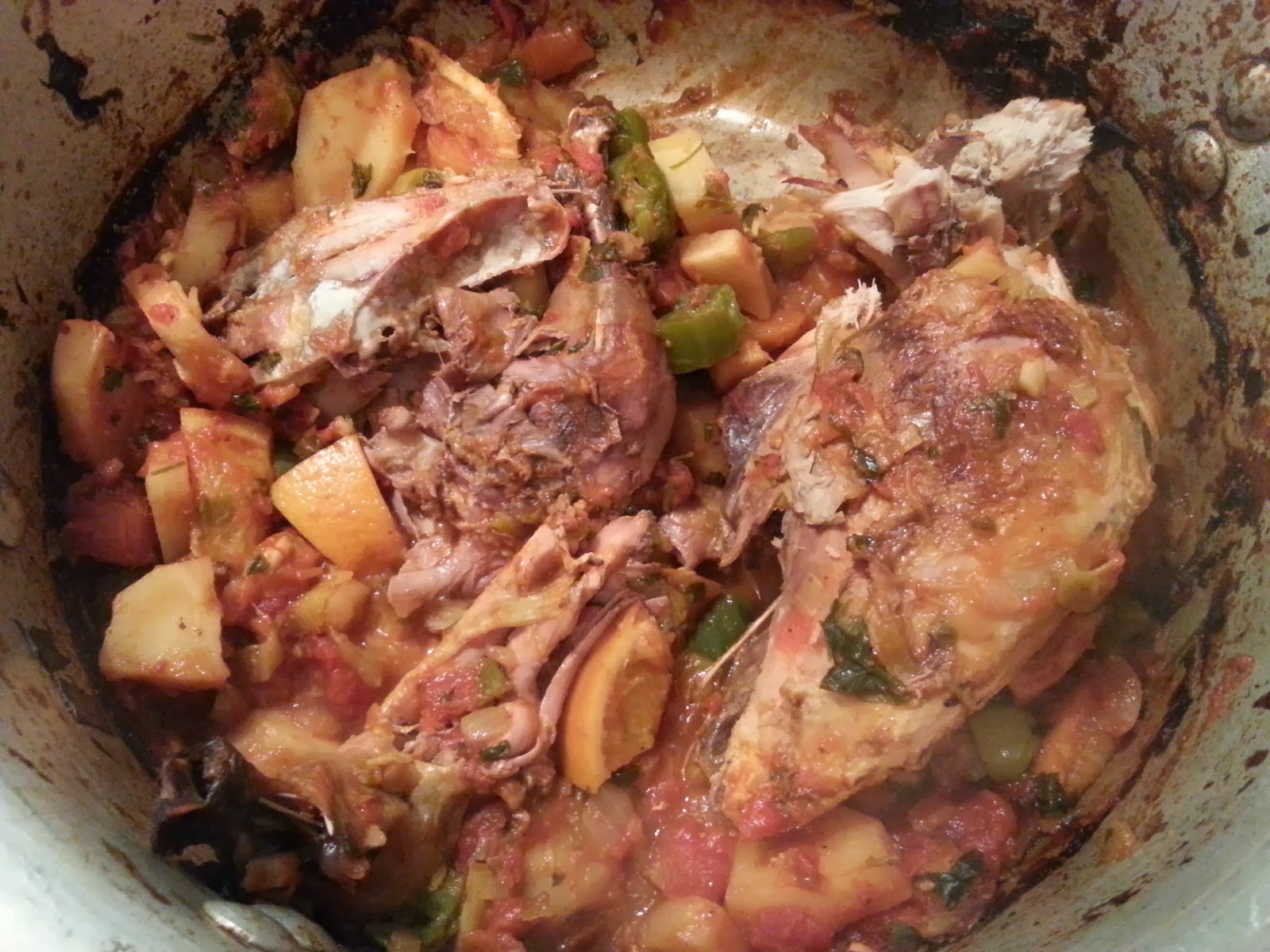 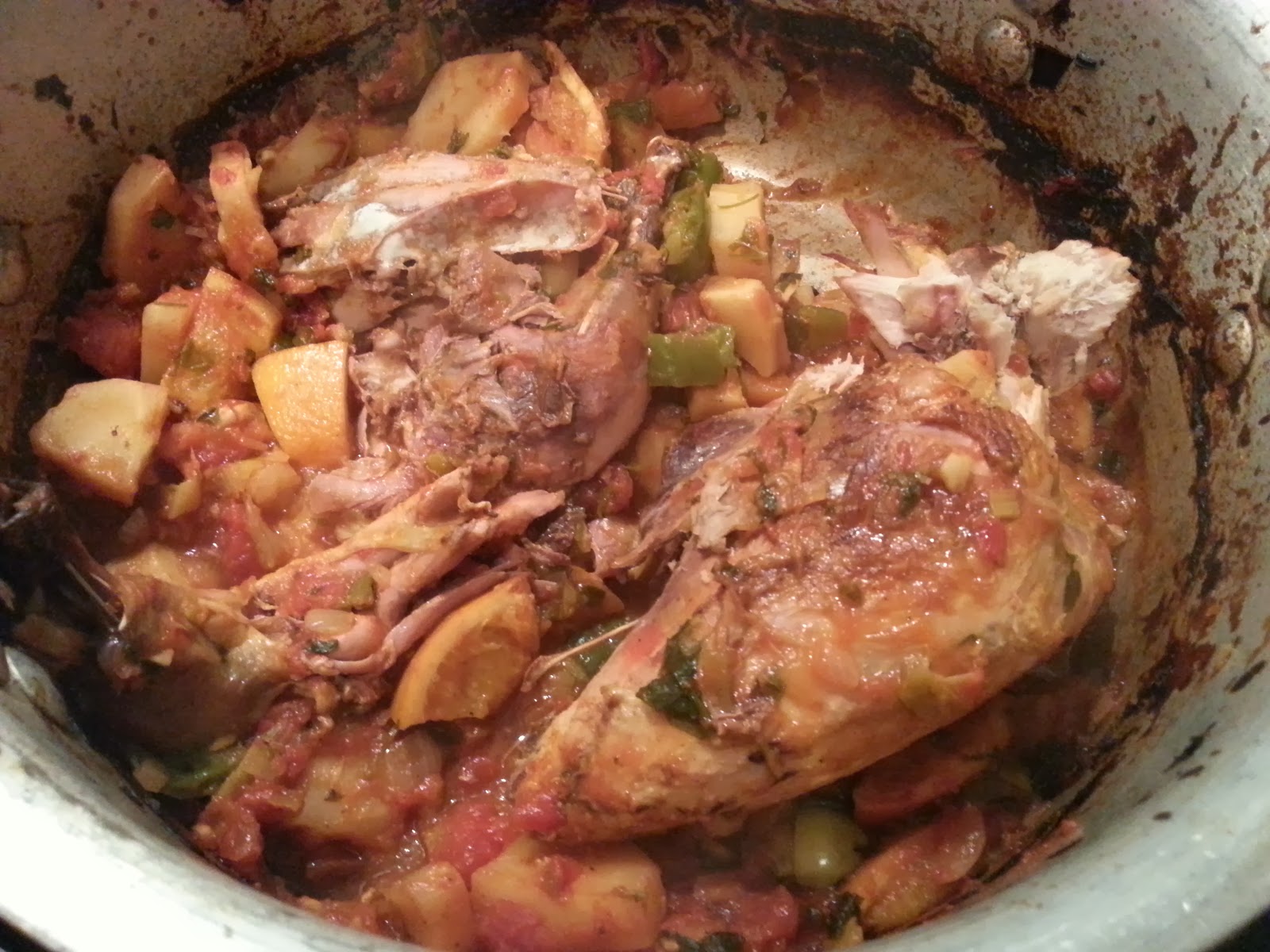 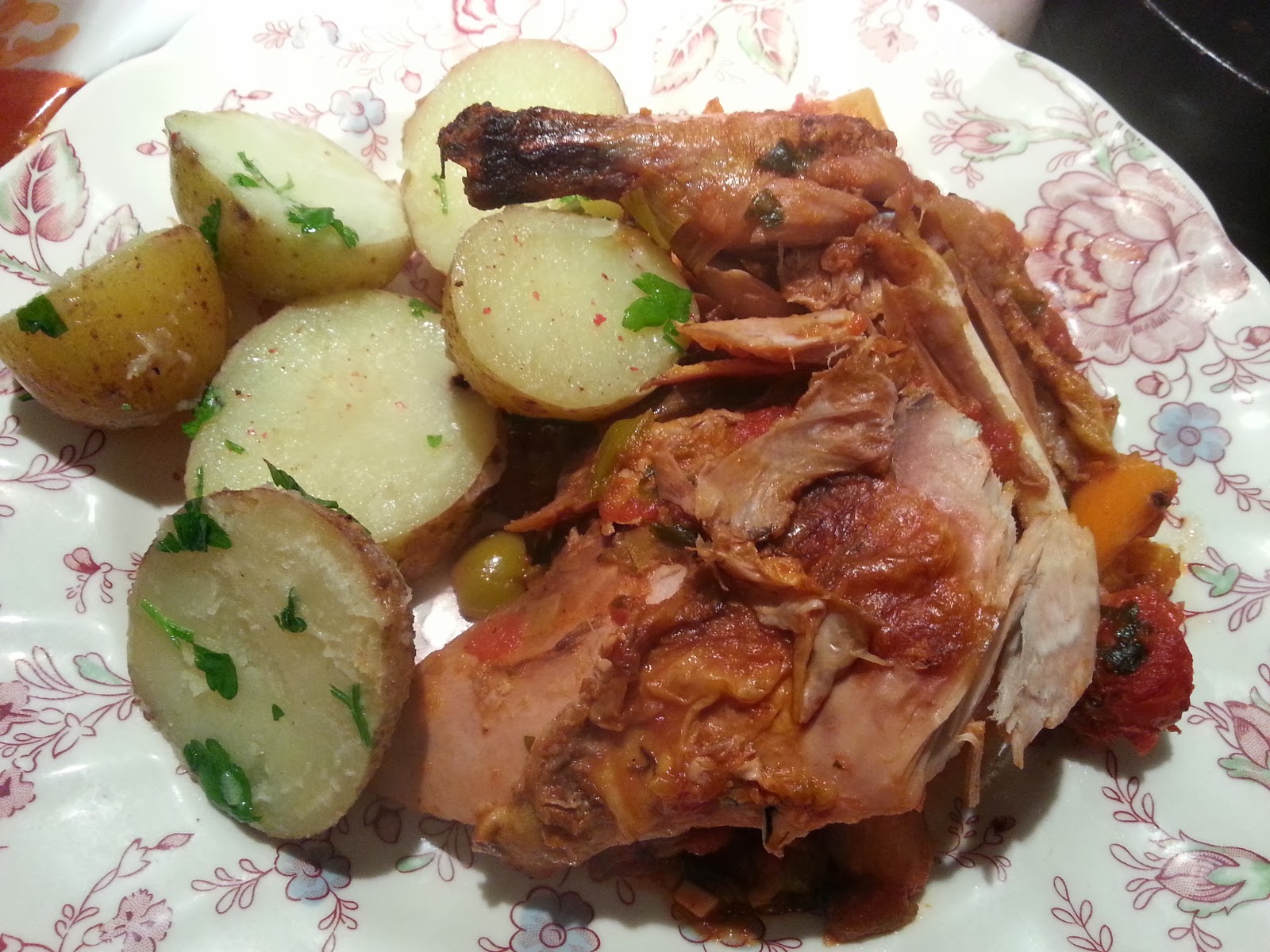 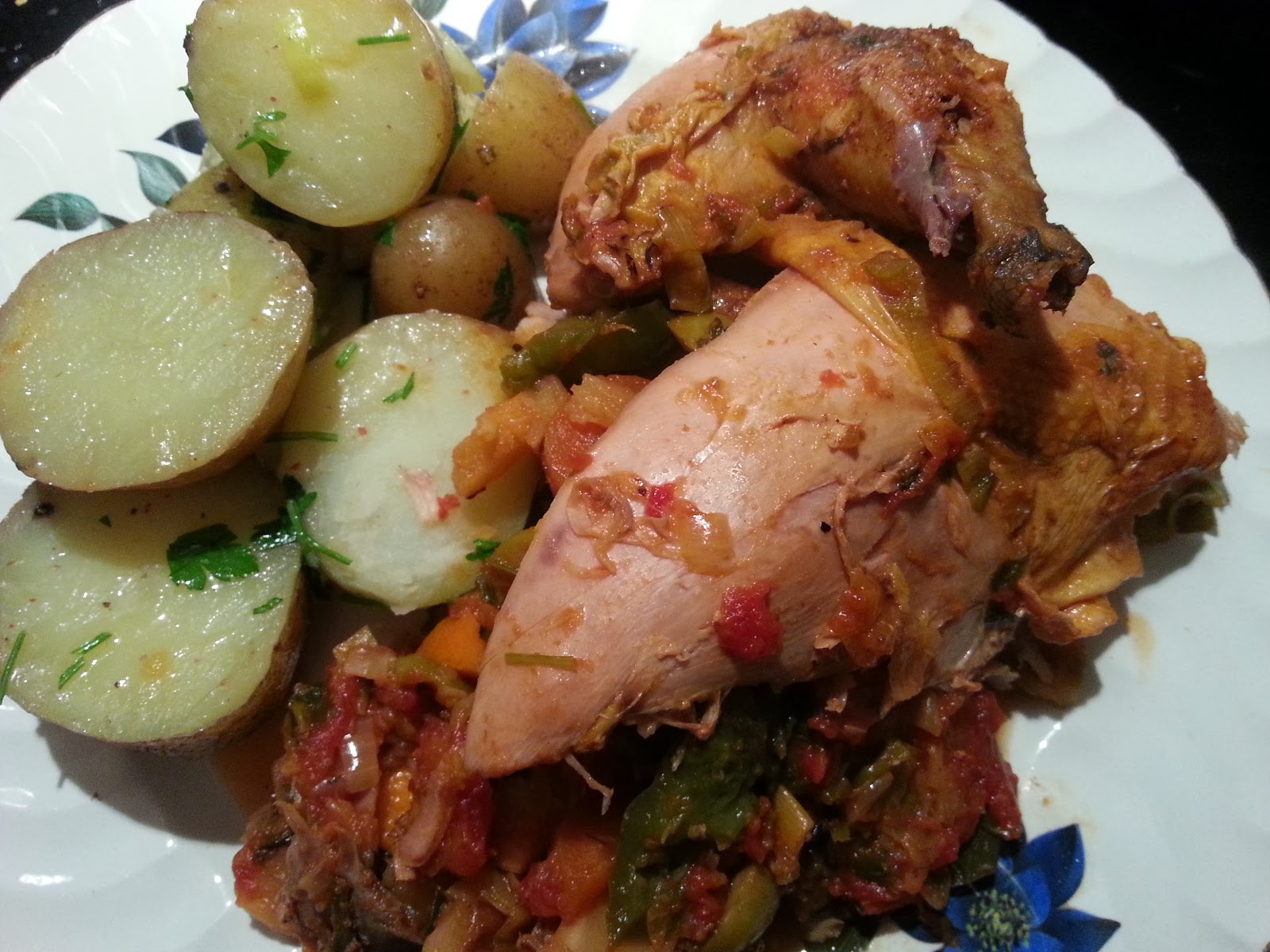 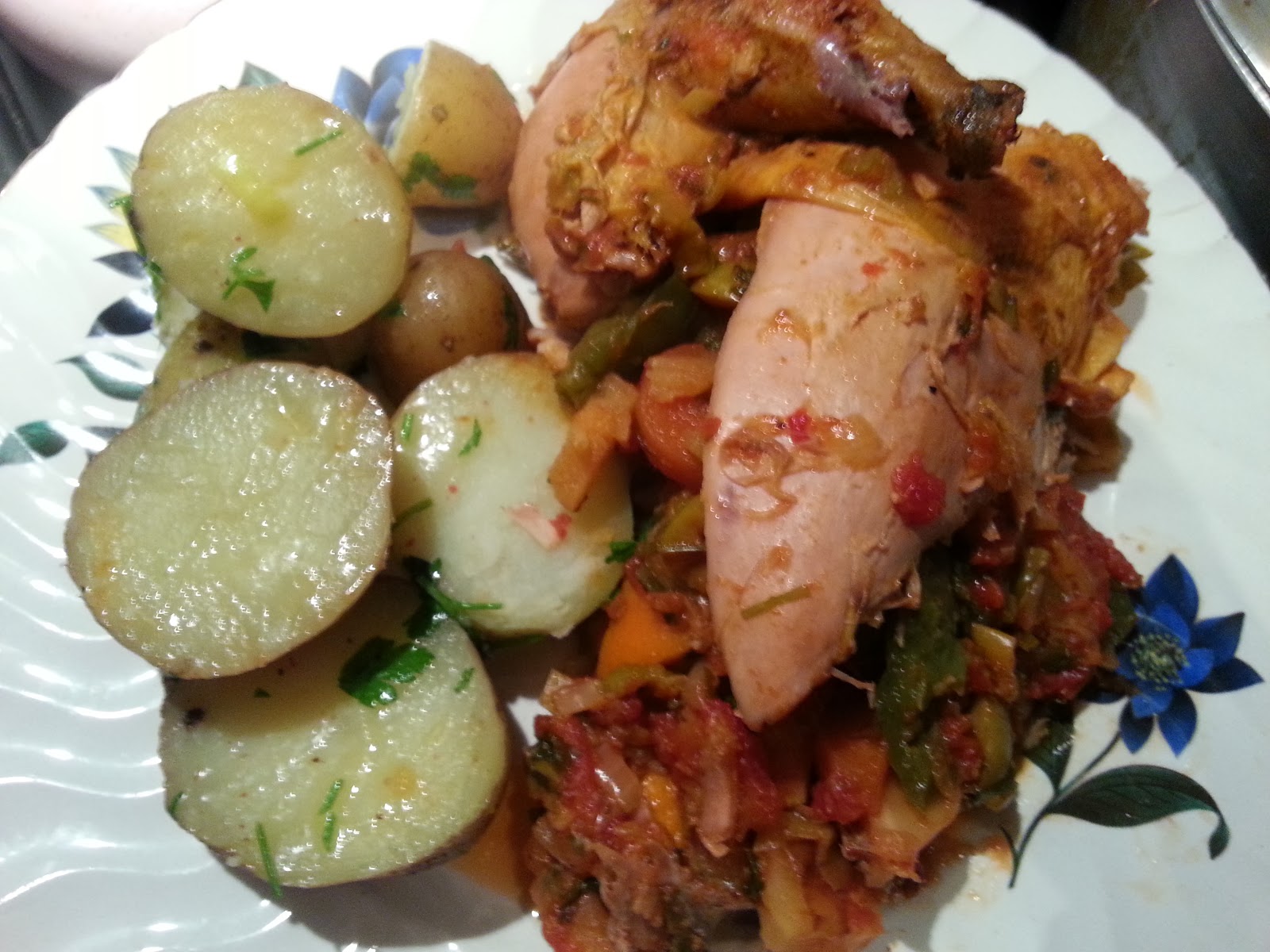 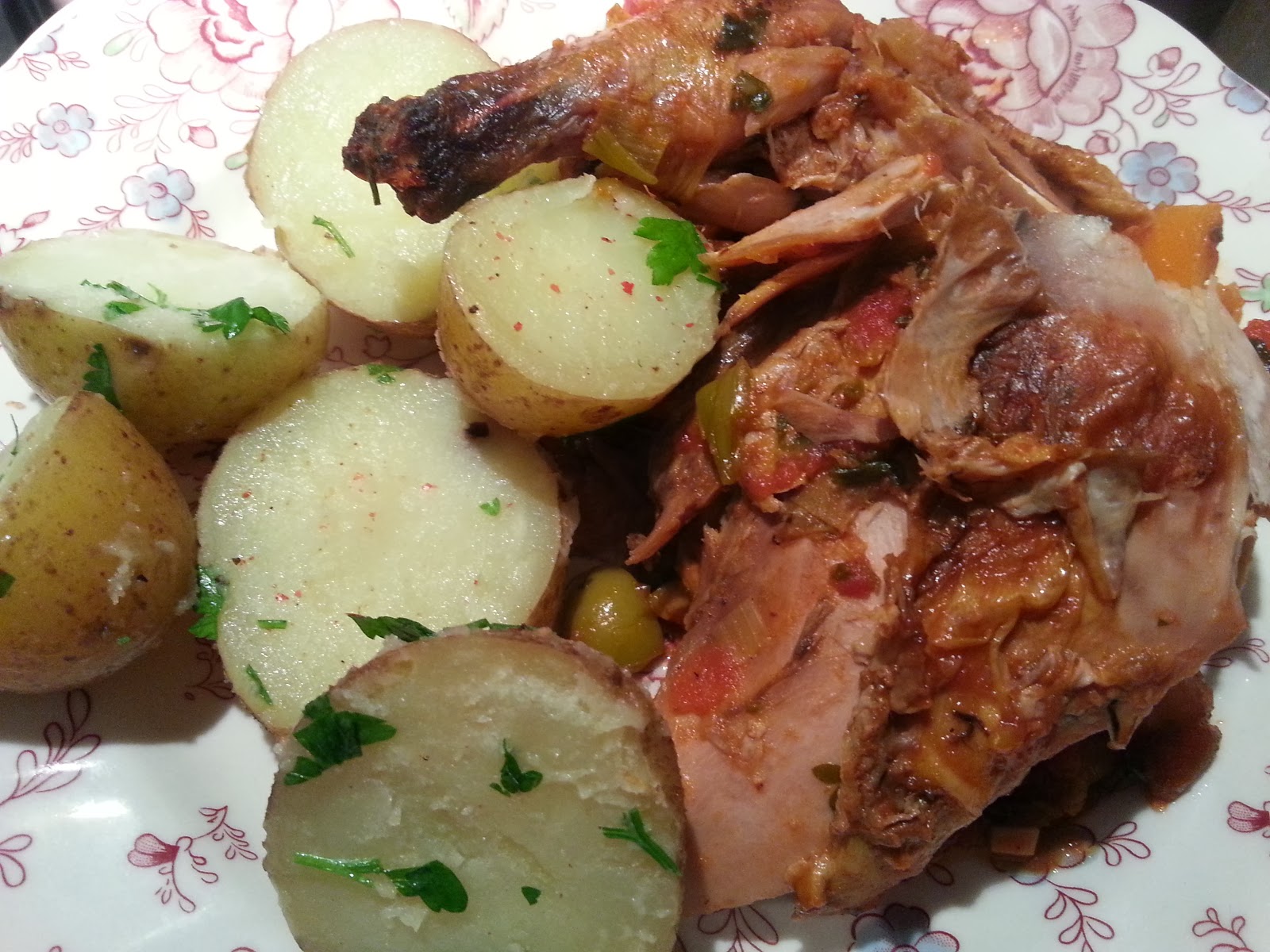 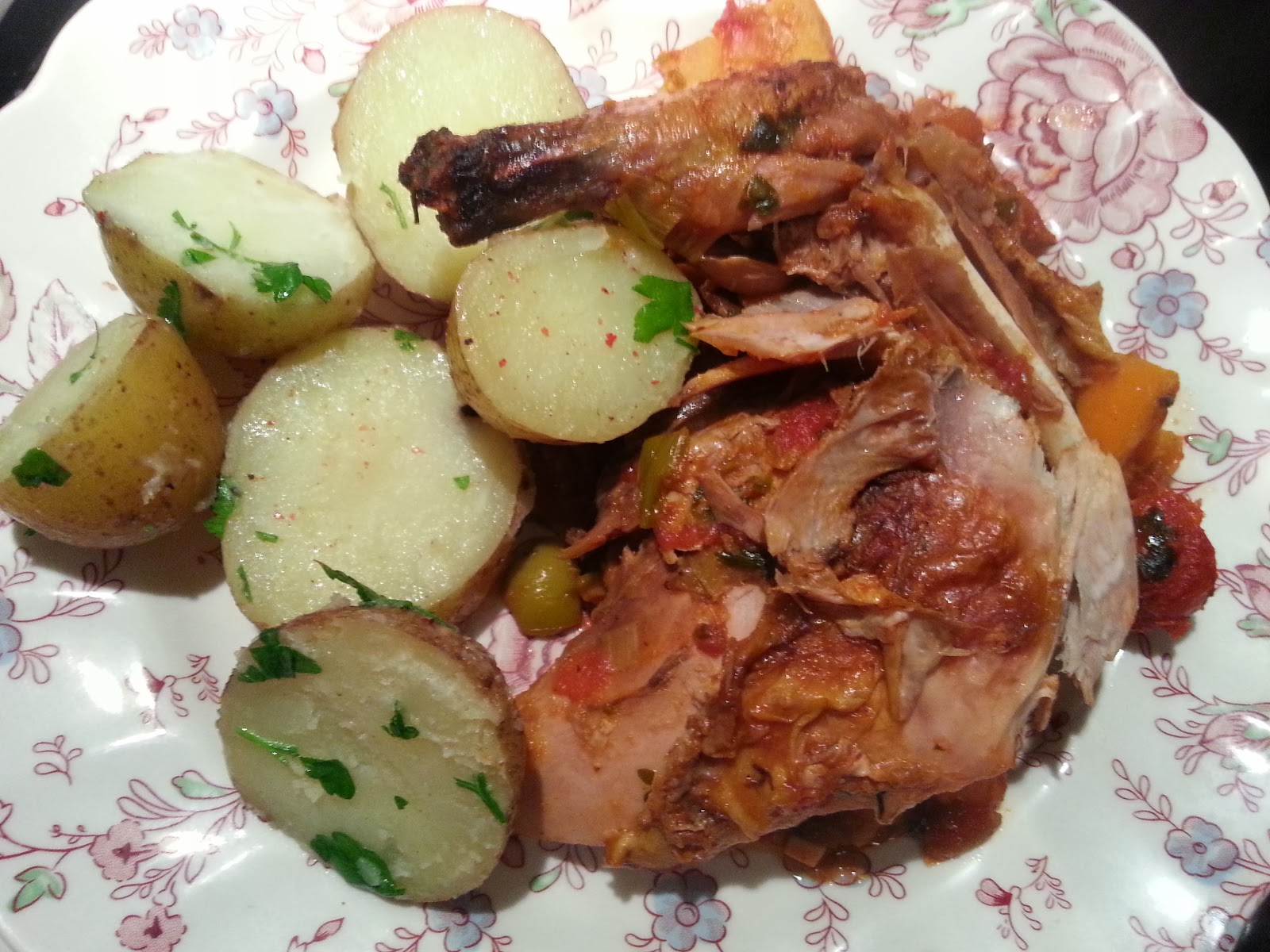 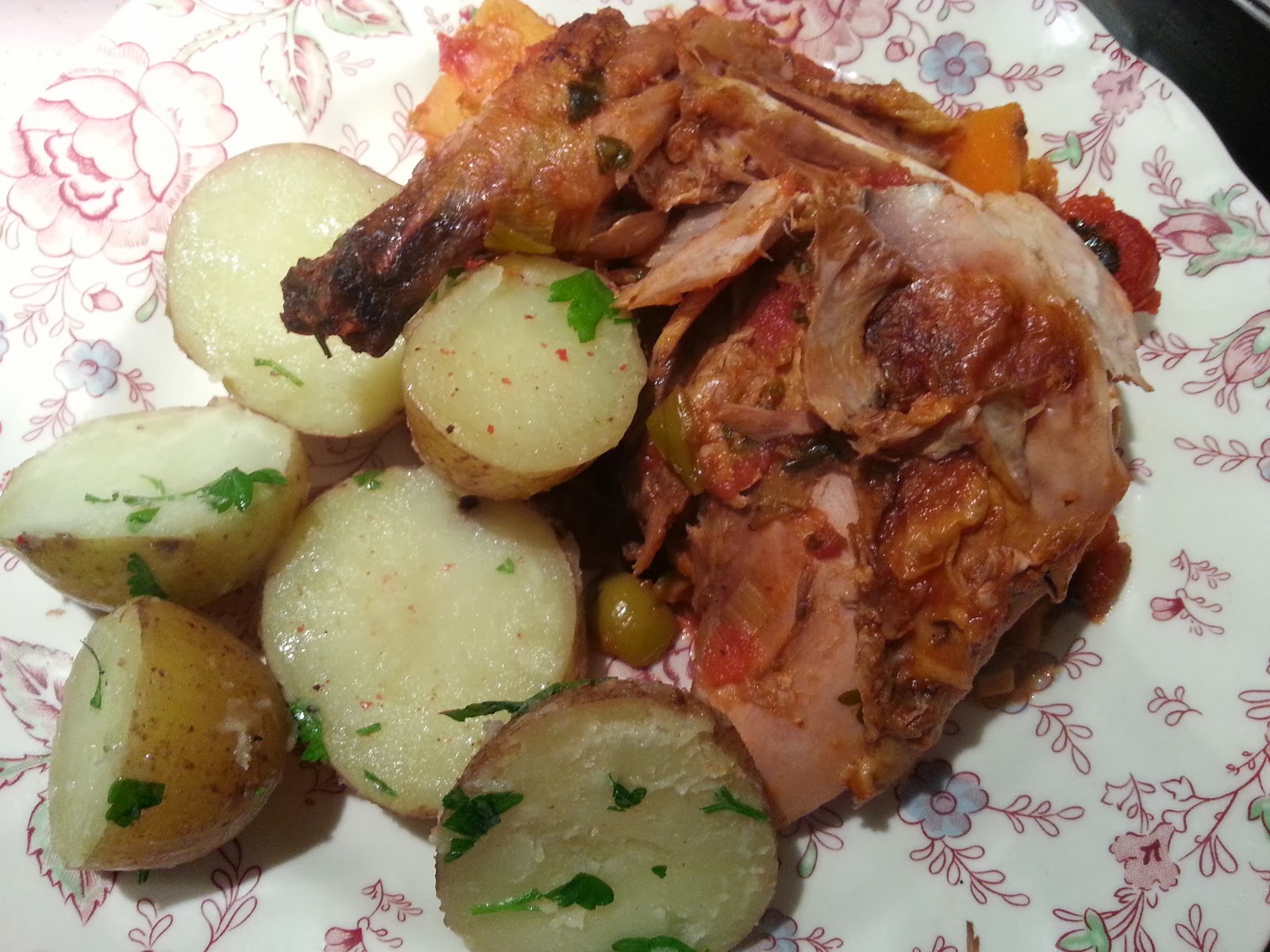 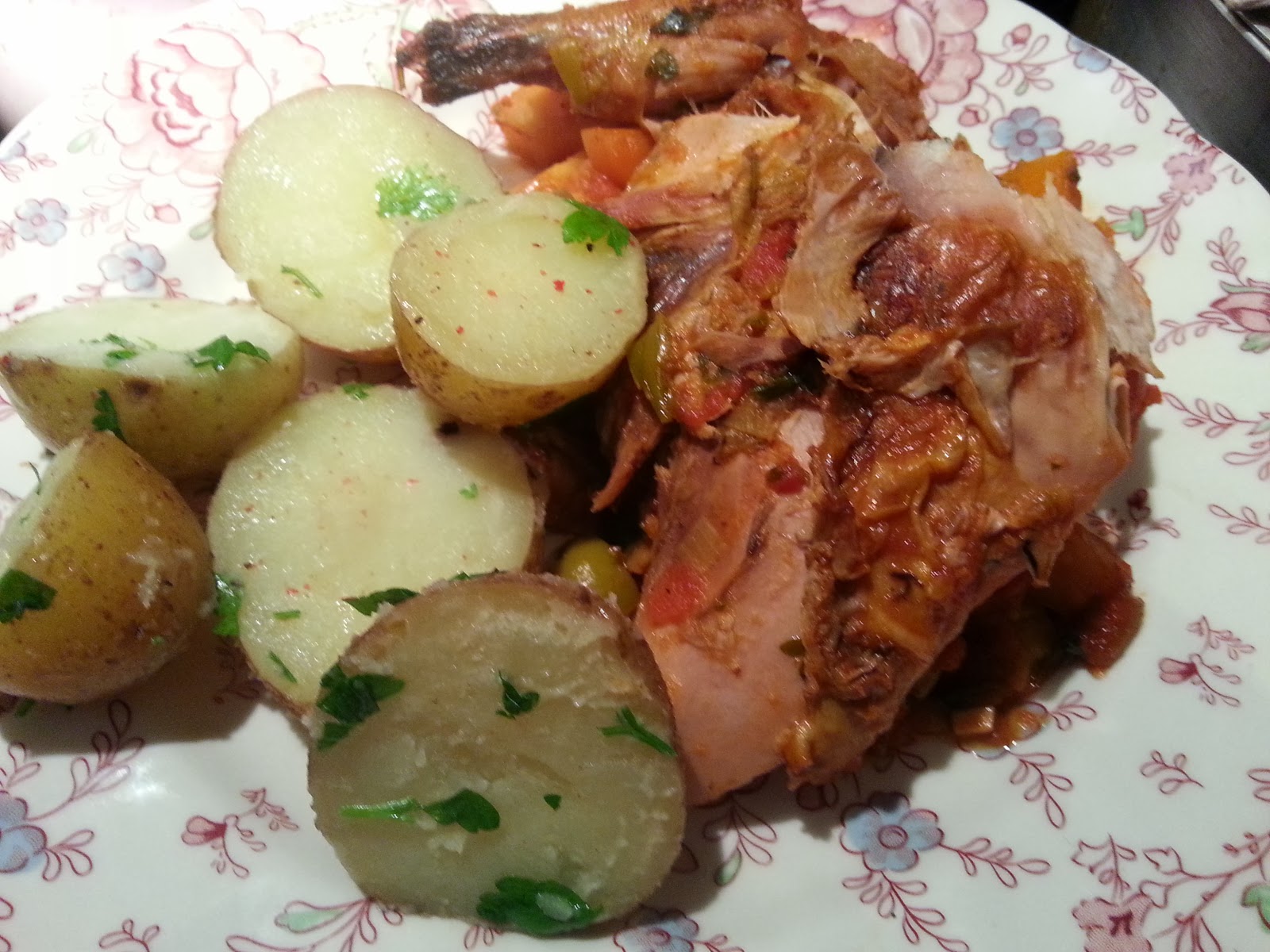