This is another meaty dish, but I actually wish I'd made a veggie version, substituting the turkey for a mix of barley or beans cooked in stock, as I think it would have been juicier and tastier. Not that this wasn't tasty, it actually is. It has that fragrant, comforting flavour of roast dinners, and it all works perfectly well together, I'm just not a fan of turkey really. It's my own hang-up, I just find it underwhelming. I thought I should give it another go though, as my last turkey creation was much yummier than ever expected, but I did completely smother that in spice. Hmm. Obviously I prefer turkey deep fried and/or as a carrier for other flavours. Thank goodness for cottage cheese, eh?

Ostrich! That would have been better. Why aren't there any ostrich farms in Kent?!

Anyway, stuff your mushrooms anyway you like. Here's what I did. 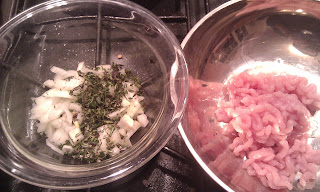 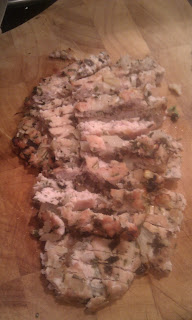 What's your favourite mushroom stuffing? I like quinoa for stuffing anything, but we all know that's out of the window now. Only cupboard supplies left, so my last few grains are precious and will need to go towards something amazing! What to do...what to do..?