Friday saw me stuck in waiting for a delivery, and having fallen off the wagon a little bit this week, (did you know that Dominos do gluten free pizza and it's actually nice?! Forgive me, but it's very rarely I get to eat pizza) I had some surplus veggies.

Not being one to waste things and not really feeling just prepping and freezing it, I thought I'd make some pickled goods. I revisited my tried and tested red cabbage sauerkraut, but also added a new cauliflower pickle to my repertoire and it looks very pretty. I haven't tried it yet, but apparently it should be ready to taste by now, so I'll let you know shortly how it tickles my palate. Hopefully I'll have some feedback from those who received them as gifts this weekend too.

The recipe I used was one I found here, and the only adaptation I made was swapping the red pepper for red chili. I didn't have a pepper and, hey, who's afraid of the big bad Scoville scale?! Not me!

Next I'll be trying out a Brussel's pickle, as I've still got a lot of those blighters laying around too. It sounds dangerous, but it could be life changing! 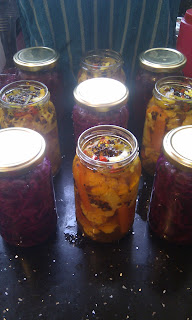 It's Monday, so again I will be joining in with the fabulous
The Homestead Barn Hop