I'd been planning a trip to Brockley Market for a while, but being the social butterfly that I am, more often than not Saturday mornings are rarely compatible with productivity.

I pulled up in the car at around 11am, and was pleasantly surprised to discover plenty of parking spaces- bonus. Armed with a handful of canvas bags, my Partner in Crime and I set off to explore the wild and wonderful myriad of munch!

There was a good selection of stalls, lots of lovely looking vegetables, meat, dairy, street food and baked goods.

I was a little overwhelmed and excitable by all the gorgeous edible displays and had to decide to not even look at the veggies, having a fridge full of lovely Kent grown produce at home. 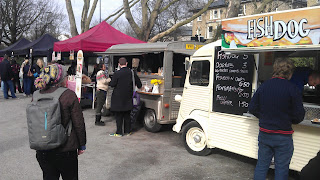 There were also loads of greatly named street food vendors, selling lots of yummy looking meals, lots of which my wheat hating body wouldn't allow me to indulge in.  Jealous doesn't even come close! 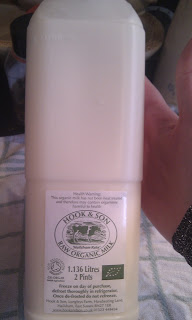 First port of call was the raw milk stall for Hook & Son. What with my new found love of making cheese, and the fact I don't believe I've ever tried raw milk, this appealed to me quite a lot. I don't think I'll regularly be buying it, as it's quite expensive and also not as locally produced as my usual Hinxden orders. Also, having tasted it as just milk, I don't actually like it, admittedly I'm not sure if it's how it's supposed to taste or not. It seems quite sour and acidic, and tastes a little like it's on the turn, but it doesn't smell off; I'll let you know how the cheese turns out.

Next up, as former Queen of Pies, I couldn't help spotting the bloody amazing looking pastry creations on the Hartland Pies stall. I obviously had to insist that my pie munching companion indulged in one of them, just so I could experience some vicarious pleasure. He opted for the black pudding pork pie, and apparently it was delicious and much more moist than expected. Swoon. I was allowed some of their pork scratchings though, so at least I did get some immediate pork to face offerings.

I also managed to bag myself a couple of gluten free savoury treats from the Free From Bakehouse, one was a goat's cheese and onion tart, which lasted all of two seconds- and I had to share it, bloody cheek. It was nice with lovely caramelised onions and some delicious goat's cheese, but it was quite small and one of the more expensive items there. The other thing I bought was a jalapeno and corn muffin, which looked lovely, and had a nice texture, but quite frankly had very little flavour. It ended up being lost amongst all the other beautifully flavoured finds of the day. They had a large selection of gluten free sweet treats, which all looked fabulous and I'm sure were delicious, but I personally don't have much of a sweet tooth, and would have preferred a greater choice of savoury items.

I did, however, manage to pick up a wheat free loaf from Aston's Bakery. It was a good, solid loaf, a bit on the small side again, but had a variety of grains involved and worked really well as a base for everything else we'd picked up that day. Next time, I may try the Rye and see which I prefer. 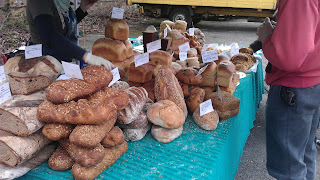 My favourite stall of the day was, without a doubt, Moon's Green Charcuterie. Moon's Green are based in Kent and the stall was manned by Kiwi pig enthusiast John. John was a lovely personality and clearly cared a lot about his product and was happy to give us information on all his wonderful porky treats, what went into them and his children's favourites (cheek ham in a sandwich, if you were wondering). 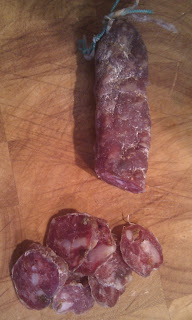 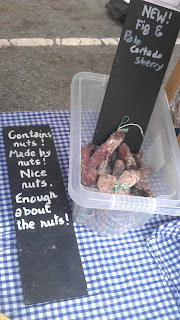 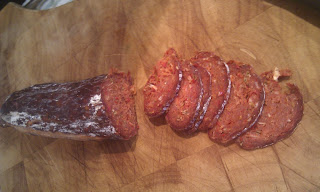 We tried all of his amazing tasters and came away with a lovely fig and sherry salami which had a subtle, rich flavour, and you could definitely taste the sherry influence. We also purchased a stonking Cheeky Chorizo, which is one of the spiciest creations I've ever consumed. My campañero and I discussed it at length and we decided that it is "like yum, lots of flavour, and then your face is on fire, and it's like, Christ, that's hot! Then it calms down and you're left with a sweet aftertaste and an uncontrollable desire for more". Needless to say that both of these sausages were finished off rather quickly. 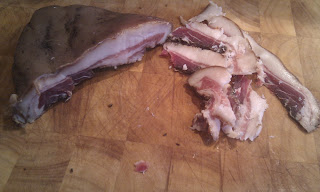 The highest achiever in the great flavour stakes, in my opinion, had to be the cheek bacon. Oh my God, when I die, this is what I want to buried in. It's a definite work out for your knife skills and molars, but golly gosh, it is so unbelievably yummy I want to be mummified in it. The strong rosemary tones compliment the salty pork so well, I would marry this piece of meat. Even if it didn't ask me and I had to force it down the aisle at gun point. If you do one thing in your life, try this beast of a creation. Seriously. You don't know how happy it will make you. If you ever try and come between me and my cheeky, I will have your hand off. And your face.
Back off.
It's mine. 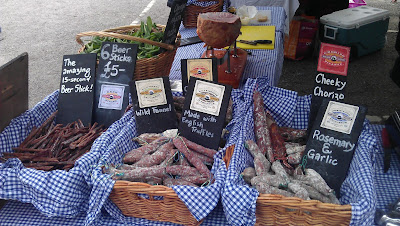 I also purchased a fine chorizo from a lovely, knowledgeable lady at Flavours of Spain, and some very rich Red Wine Vinegar and mixed olives from a helpful gent at Olive Branch. Both the olives and the chorizo have also been devoured out of existence. 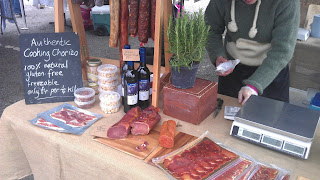 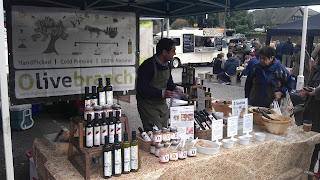 I have already mentioned the lovely smelling, fantastically named street food vendors, well I did actually manage to sample the wares of two of these huts of wonder. 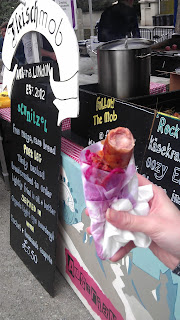 The first was a very accommodating gentleman from Fleisch Mob, who very kindly and carefully wrapped me up a sausage and some pickled red cabbage in some paper so I could actually eat his oozy, cheesy sausage sans bun. It was yummy, Mr Muncher raved about every bite and tried to steal away the final nibble! His red cabbage, which had a sweeter taste than mine, was also scrumptious (not that I was jealous or anything, yeah?), and made a beautiful bed for the Rib Man's Christ on a Bike sauce. 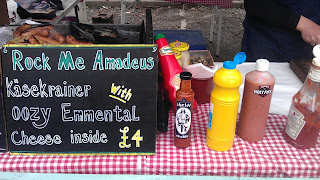 After this, my consort in greed and me went for some Mexican street food from Luardos. 100% corn tortillas (yay!), we decided to sample one of each; fish, meat and veggie. They looked very pretty and were made by a very patient and amiable server, who stayed calm even after I'd managed to confuse her along with myself. It was OK though, once I finally remembered how to count to three...
My favourite was surprisingly the vegetarian option which had some delicious braised fennel in. All three wraps were lovely, if a bit messy to eat, but the combination of the fennel, beans, salad and sauce was spot on. Can't fault it. 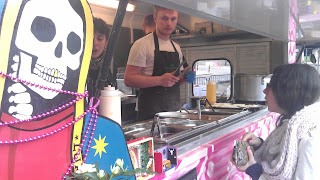 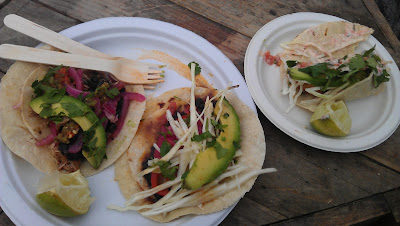 All in all, a bloody good day. Here, have a gratuitous photo of our lunch all piled up on the table for a "picky" dinner.