I'm not the most accurate person when it comes to cooking, preferring to go on instinct and make things up as I go along, using my pre-established knowledge and natural skillz to make awesome concoctions of food joy. This is fine when you've mastered basic techniques that you can adapt at will, but as soon as I went gluten-free I found any attempts at baking came out like disappointing, soggy, structurally unsound globs of NO.

So, basically, I miss pizza and begrudge paying nearly £20 for an average sized piece of edible pepperoni smothered dough. So, I decided that I was finally over all my previous gluten-absent baking attempts and ready to start again!

I found this simple recipe  and thought- I could probably do that. I made a few changes- obviously- and here is the result. 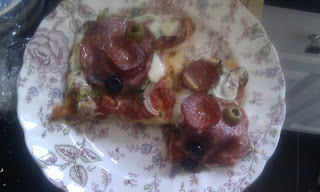 It's Not Right, But It's OK Gluten Free Pizza Recipe
Serves probably 4-6, but I ate it all myself over two days.

Now, the result was actually quite pleasant- it actually had a pizza dough like consistency, like actually. It was a bit deep pan for my preferences, but still, a huge leap from past experimentation. I would also use less gram flour, as it has a rather distinctive taste- it didn't overpower, but I could taste it, and I'd rather not be aware of an individual flour in a faux pizza base.