Cheered by the improved weather, and with a free weekend on our hands, Alex & I decided to have a thoroughly Kentish weekend.

Saturday
We took a little bit of a tour of Sevenoaks, I got up early and made us a picnic to take, which consisted of gluten free spicy cauliflower and broccoli fritters, and a vegetable and Barkham Blue frittata. All veg and eggs from my  Kent Veg Box, and the mission being to find a scrummy chutney to dip our fritters.

We took a little drive, and somehow failed to successfully stumble across a farm shop before hitting Oldbury Hill, we did however stumble across some Kent wine, but we were received rather curtly and I'm allergic to wine, so no purchases were made. Chutney-less we took our picnic and had a walk through the woods. With our keen sense of direction still in tact(!) we managed to circumnavigate the Oldbury Hill car park, completely missing the land on the opposite side. We did manage to find a nice rotten, fallen tree to sit on and have our nibbles though. So smelling of damp and covered in moss, we returned our picnic bag to the car and refreshed by full bellies, discovered a whole entire area yet to be trodden by our feet. We even got a little go on an awesome rope swing!

After some aimless country wandering, we decided to head off and took a little nose in The Village Store, boasting Kentish strawberries and asparagus, and -dun dun dun!- CHUTNEY! I'd not tried Corinne's Creative Kitchen's Angels & Devils chutney, but as you can tell by the empty looking jar, it was bloody lovely! We scoffed the entire lot with the rest of the fritters that very evening.

Also from the Village Store; some Kent Crisps and resolution to visit Quex, some Mrs Crimbles Coconut & Jam rings (I know they're not local, but as someone with a rubbish digestive system, sometimes the simple indulgence of having a biscuit is too much to overcome), and some Bath Pig Company Snack Chorizo. I gave the back of the packet a glance, and was delighted to find free-range British pork being used to make chorizo- score! Upon further investigation of the packet though, I was a bit miffed to discover that although the pork and the company were both British, they shipped the meat to Spain to make the chorizo, and then obviously shipped it back. This little piggy went quite a way before he got to market. They say it's simply due to space, but surely you can hire hanging space in the UK, non? It seems I'll have to do something I said I've been wanting to try and start curing my own meat, so I can have good, ethical British cured pork.

We also managed to get some beautiful free-range, Kent pork from H.W. Coldbreath, taking home some smoked bacon and pork belly ribs (again!). We could have had some lamb, but given the choice between pork and anything else, Alex (and me), will always pick pork. All their meat is local and free-range- except the chicken, which is from Norfolk- and they supply The National Trust and schools. What I like is that all meat is slaughtered in their local abattoir and the meat is hung in the shop- extremely low meaty mileage and consistent care and attention.

The belly ribs themselves were delicious. I rubbed the meat with salt, pepper, minced garlic, Chinese 5 spice and a little oil and then covered and left it in the fridge overnight. I added half a can of cider to the dish before covering with tinfoil and cooking on gas 4 for an hour and a half, before uncovering and roasting for a final hour. I served it simply with steamed asparagus from my veg box with a slice of bacon and a couple of baked chips. It was amazing. The cider, and spices had mingled with the meat juices and provided a beautiful little gravy that needed no meddling at all. 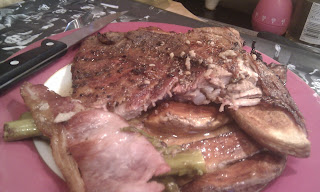 Sunday
Minus a picnic this time, we headed off down the motorway to Whitstable to get some rather fresh fish. Our accidental first purchase was actually from The Cheese Box, where we picked up some Kent Cider Company bittersweet cider, one of the best rye loaves I've ever eaten, the Whitstable Pickles Co. plum & fig chutney pictured above and some Old Winchester cheese. I'm not a massive fan of the Old Winchester, I think there are far superior cheeses, but it went well with rye bread and chutney. The rye bread had a brilliant texture, good and crispy on the outside and a great chewy middle, hard to achieve with 100% rye. The chutney was also delicious and even managed to survive the night this time, with their still being some left now. We have yet to tuck into the cider... 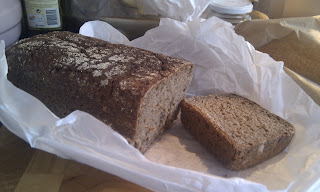 After filling the car up with all our booty, we returned to the sea front and took a stroll past a variety of seafood restaurants, stalls and the market, my excitement and urgency building with every menu and fish laid out on ice. Upon reaching the Crab & Winkle, we made a decision to go inside- I could cope with the temptation no more.

Lovely to see some fine Kent booze on the menu, I ordered up a Shepherd Neame Whitstable Organic Ale- like the lady I am- and my dining partner had a raspberry wheat beer from the Whitstable Brewery, enjoyed on the balcony overlooking the harbour. 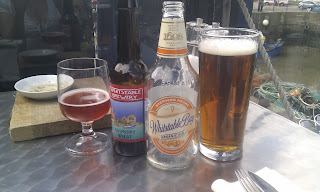 Our fish dinners were unsurprisingly, mouthwateringly fresh and went down incredibly easily. The portions were generous, although not having chips or batter meant I fared better than Alex, who had slightly overstuffed on "the best fish and chips I've had in ages", which, to be fair, was massive and served on a plate the size of a bin lid. I'm afraid I was too busy chewing and enjoying the balcony sunshine to take any dodgy fish pics. 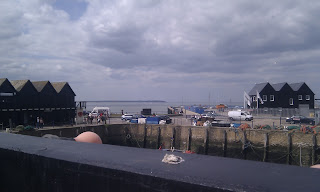 Being the glutton that I am, and completely unable to resist the true delights of Whitstable- I had to have two live oysters on ice with a little lemon. Being so recently plucked from the sea they were blooming gorgeous, even if I was getting scowling looks and calls of "Barbarian"  from my company. Tiny tub of mixed seafood in hand, it was time to head off along the beach.

A rather successful weekend all in all. 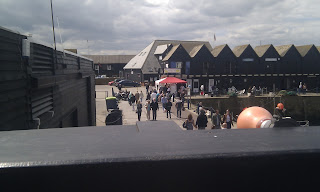