I have been a little neglectful lately and this post is long overdue. Slapped wrists all round.

Last month was my birthday and I was duly informed that I have the best boyfriend ever!!! (His words). Although, there is some truth in it, as on my anniversary of life I was delivered a rather large box with my champagne breakfast. Now, I'll state for the record, it's not the size that matters, but the contents was pretty much the perfect gift. Ladies and gentleman, let me introduce you to... 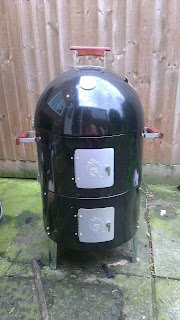 That's right, romance is not dead! I got a hot/cold smoker! And smoke meat and fish and eggs and veg and cider I will! There was a nice big selection of wood chips and dust to go with it and apparently the staff at HotSmoked are very friendly, helpful and well informed. Check them out.

Having bought a brisket the week before in anticipation of cooking a family meal in honour of both mine and my sister's birthday, the first sacrifice to be be made to the gods of BBQ was decided! 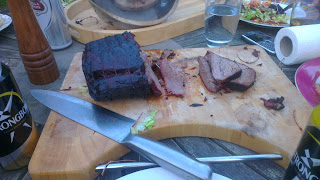 I made up a simple BBQ sauce and got up bright and early to stoke my fire. The meat was going to need a steady cook over around 8-10 hours with a handful of whisky oak chips, and I basted it every 90 minutes or so. I accompanied my slab of beef with potato salad, garden salad and some beans that I also put in the BBQ sauce. The result? Bloody yummy! Not a scrap left. 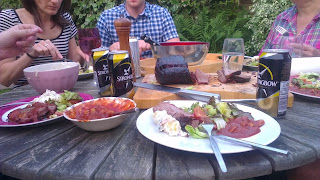 Dessert was also a triumph, if only that it meant I had finally managed to find a way to use up the nine horrible, disgusting beetroot that I had received in my veg box, and make them actually edible. That's right, nine of the evil, dirt tasting fiends went into creating a gluten-free beetroot brownie. Despite the fact you could tell the beetroot was in there lurking somewhere, it was really gooey and chocolaty and yummy, and meant that I didn't want to destroy all beetroot crops in existence for crimes against my taste buds. Still requested that I never be sent them again though; getting fat from beetroot consumption is not the way forward. 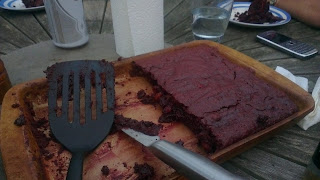 Anyway, once the torrential rain has stopped smashing my hopes and dreams of smoking more stuff, I will be experimenting with more combinations of meat, fish and wood chips, and am also one step closer to curing and making my own sausages and bacon. All far too exciting! Too much dribble on the keyboard...